Her music mirrors that mentality and largely reflects her life.

With acts like Chief Keef and Lil’ Reese bringing the hip-hop spotlight to Chicago, the city has become known for a style of rapping known as “drill.” The subgenre, which is rife with sputtering snares, uptempo rhymes and the sounds of gunshots in the background, has been largely dominated by men.

Enter Sasha Go Hard. At first glance. the petite 20-year-old Hyde Park native may not look like she fits the part of a “drill rapper,” but her disarming smile offsets a gritty demeanor.

While many have benefitted from the spotlight focused on the city, Sasha Go Hard has managed to build her name elsewhere on the strength of a well-received performance at the 2012 MTV Sucker Free Chicago event, where she showcased her mixtape “Do You Know Who I Am?” That led to a set at the CMJ Music Marathon in New York City in October. She will perform Friday at the Hotel Victor Lounge.

“I’ve really been able to build a solid following out East, and it’s always so much fun to go to New York,” she said. “It’s crazy, though, because every time I leave Chicago, it’s just so good to come back and feel the love.” 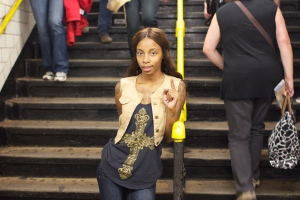 As one of only a few female hip-hop artists to emerge from Chicago with a national following, Sasha Go Hard is also blazing a trail for young women like herself to pursue their artistic dreams.

“Every day I think about it, I feel really blessed because I’m not the only one who’s doing this but I’m getting the attention I deserve,” she said. “It’s just me being who I am, which I think shows others out there that it is possible to be successful in hip-hop as woman.”

Last year was big for Sasha Go Hard, with two critically acclaimed mixtapes, as well as co-signs from the likes of Azealia Banks, Trinidad James and Rockie Fresh, and a collaboration with Electronic guru Diplo.

She is now preparing to drop her latest project, “Round 3,” in February. The project features production from Absolut P, Block, Diplo and Chicago’s own Tony Roche, and is hosted by fellow local DJ Victoriouz.

If the past year is any indication, Sasha Go Hard doesn’t look to soften her approach any time soon.

“One thing in music I’ve learned so far is that you can be on and then off very quickly, so I just want to make sure the music I put out is consistent,” she said. “‘Round 3’ is going to be crazy, and I’m excited to have people rocking with me. I’m ready.”

Kiara Lanier Among Many Local Faces on Lena Waithe's 'The Chi'